Our Crisis Is A Crisis of Aesthetics
Finally, Aesthetico: the much-awaited last issue of the Blueprint for a New World series … a call for an aesthetic awakening, a re-wilding of the capitalist imagination — an adjustment to the mood, the tone, the style and thrust of our lives that has to happen if we’re going to have any kind of a future on this planet.

Is our crisis a crisis of aesthetics?
Can we design ourselves out of a terrifying future? Where is the human spirit heading?

Plus:
– Neala Schleuning on art as action
– Niels van Poecke on postmodern narcolepsy
– Mark Cheetham’s Ecoaesthetics: Manifesto for the 21st century
– Douglas Haddow on the holy capitalist grail
– Keith Harrington on utopian economics
– Hala Habib on the Arab sense of beauty
– Fuckitall Rewild the Capitalist Imagination Design Quest — an attempt to shift the aesthetic tone of the world.
– Aesthetico: a 144-page phantasmagoria of leaves, dreams, intimations and aesthetic bliss.

About Adbusters:
Based in Vancouver, Canada, Adbusters is a not-for-profit magazine concerned about the erosion of our physical and cultural environments by commercial forces. Its aim is to catalyze a sudden, unexpected moment of truth — a global mindshift — from which the consumerist forces never fully recover.

Adbusters is a global network of culture jammers: writers, artists, designers, rabble rousers… hackers, philosophers, pranksters, poets and punks who believe that mental environmentalism is the defining social struggle of our era. They vow to change the way information flows and to shake up the production of meaning in our society.

There are no reviews yet.

Be the first to review “Adbusters #117: Blueprint for a New World Part VI (Aesthetico)” Cancel reply 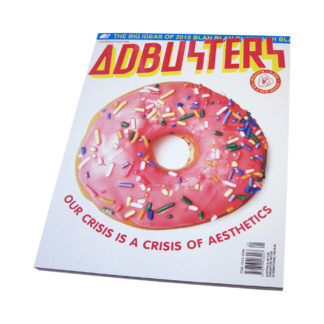